Feast in the forest at the Campfire Cookout

A Treat For All Music Fans 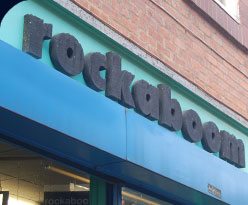 Originally conceived in 2007, Record Store Day is a celebration of the unique culture of independent record shops. This is the one day that all of the independently owned record stores come together with artists to celebrate the art of music. Special vinyl and CD releases and various promotional products are made exclusively for the day and special in-store appearances take place.

Leicester’s very own indepenent record store cavern of greatness, Rockaboom will be celebrating big style as they play host to Scottish indie rockers The View, who have recorded this year’s official anthem for Record Store Day.

The shop will have a small acoustic performance by The View to help them celebrate. They release the official anthem of the day ‘I Want That Record’ on 7″ vinyl only. It’s a cover version of the 80s power pop song by The Tweeds and the band should hopefully have a bit of time to sign a few copies.

The performance is at 2pm and there’ll be free posters being given out. Get down there early because it’s sure to be popular!

Other treats available on the day include:
Queen red vinyl 7″ unreleased early 70’s songs.
An official live “bootleg” of The Vaccines.
A 10″ vinyl reissue of The Smiths classic Queen is Dead.
A special collectors’ doublepack of 78s of The Beach Boys’s Good Vibrations/Heroes & Villains.
A Franz Ferdinand Covers EP featuring covers by Debbie Harry and LCD Sound System.

A full list of exclusives and the days events is available from http://www.recordstoreday.co.uk/

Carl Petty, owner of Rockaboom, told us, “Record Store Day shows that indie record shops like Rockaboom offer music fans something you can’t get online or in a supermarket. There’s some great product and we are expecting Saturday April 16 to be the biggest Record Store Day yet.”
Tags:EventsMusic
previous article
A Weekend of Sport and Music
next article
Free Arthur Preview