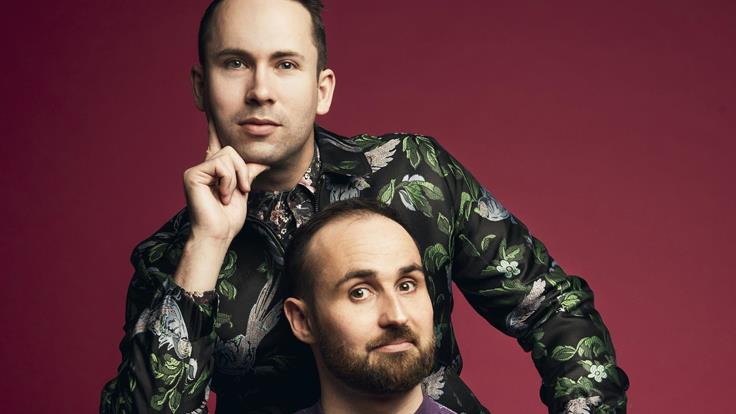 Comedy fans! Leicester Comedy Festival is right around the corner and we’ve got a special Cool As ticket offer on tickets to Max & Ivan’s show at Firebug on Wednesday 5 February.

Grab yourself £5 off tickets to the show and plan in the perfect start to your Comedy Festival fun.

Named the 4th best show of 2019 by The Guardian, Commitment is the true story of how Max, as Ivan’s Best Man, attempted to reunite Ivan’s teenage band (Voodoo 7:2, the premier ‘art rock post-punk funk’ group in mid-noughties Liverpool), for one final gig. It’s a show about dreaming big, growing up, and trying – but ultimately very much failing – to make it in the band.

This all new show melds fast-paced visuals (including a wealth of embarrassing adolescent photos) with razor-sharp gag writing, classic double-act dynamics, and a smattering of virtuoso multi-character performance. At its heart, the show is a storytelling hour about Max & Ivan’s real-life friendship, and the lengths you’ll go to (if you’re Max) in order to pull off the best night of Ivan’s life.

Max and Ivan said previously:“This is our favourite show yet! It’s all about our real-life friendship – one we intend to test to its very limits, via a series of gruelling drives and ill-advised service-station dinners as we traverse the UK.”

Grab tickets for just £8 (saving £5 off full price tickets) by using code £8COOL when buying your tickets. Ticket code is valid until midnight on Sunday 19 January. Buy your tickets online via Ticketsource.

Max & Ivan will be at Firebug on Wednesday 5 February.