The Pizza Shed launches at The Forge 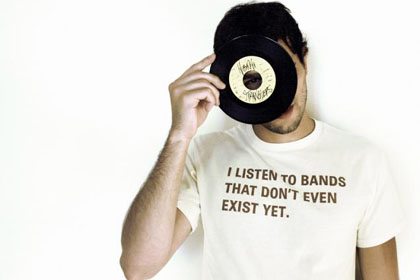 I’m allowed to say this because I did myself once subscribe to NME. Only because it was on offer for £1 per week. The subscription never got renewed though because I realized that the magazine’s glory days are far behind it and it’s now mainly full of pretentious bollocks and bought by people who think the shop assistant will think they’re cool for buying it.

Really? Did you? Or did you just go back and listen to their early stuff after they got commercial so that you can sound “cool”. You don’t sound cool. You sound like a dick and nobody cares.

By “radio”, I mean every station except BBC 6 Music. BBC 6 Music is the only station that is acceptable to you. If a song you like is popular enough to make it onto Capital FM it may as well be dead to you.

Someone who listens to pop music is clearly an air-headed moron who isn’t worth wasting your time on. Move along, please.

Or if by some magnificent stroke of luck you actually have poor enough eye sight to justify prescription glasses you choose to team these with a t-shirt that’s too small, jeans that are too tight, an unkempt beard and a fucking beanie hat.

You secretly dread weddings for this reason. Being forced to listen to somebody else’s music choices for an evening is too much to bear. So, they’ve got married? It’s the happiest day of their life. So what? It isn’t the happiest day of yours and you’re not going to pretend to be happy about having to listen to the YMCA or Katy fucking Perry. You probably regularly offer to DJ or make playlists for parties to avoid this very thing.

Except this will never happen, because the only person who cares that you’ve posted that on Facebook, is you.

Probably of bands you’ve never even seen. Just order it off the internet and nobody will ever know.

10. You’ve uttered the words or thought to yourself “I was born in the wrong decade”.

Music isn’t what it used to be. People don’t appreciate music like they used to. The scene just isn’t what it was. You deserve to have lived in a time when you’d have been at the hub of EVERYTHING. People of your generation don’t get you. No matter how much you try to educate them, it still pains you to have to live in these days. Music is your only escape from the harsh reality of modern day life.
Yawn. Get over yourself.

The Pizza Shed launches at The Forge