10 signs you grew up in Leicester in the 90s 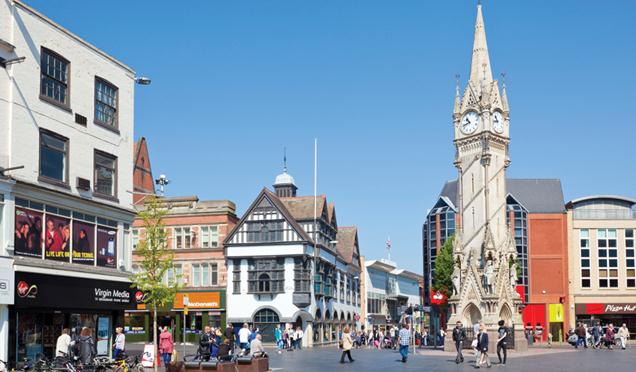 The 90s was a glorious time with amazing fashion. Ok, maybe not the fashion part but we had some good times! Can you relate to any of these?

1. You still refer to Highcross as The Shires.

Pre mobile phones (Christ… remember that?!) you had to actually arrange a specific time and place to meet your mates on a Saturday afternoon or before a night out. None of this “Sorry I’m running 10 minutes late!” “Don’t worry, I’m just in Primark, 2nd floor.” The Clock Tower was the go to meeting point. Always. Except if you were shopping you might meet outside the old Top Shop on Gallowtree Gate for a change.

As much as this has been a great year for Leicester City, let’s face it, the 90s was our time! There were Wembley trips in 1992, 1993, 1994, 1996, 1997 and 1999 and the excitement was as crazy every time. Flags out of car windows, the new Fox Leisure merchandise, stopping at Toddington services on the way down and the inevitable flag draped over the bridge on the M1 reading “The last one out of Leicester turn the lights off!”

4. You remember the wave machine at Beaumont Leys swimming baths.

A leisure centre with 2 water flumes and a wave machine! This was the greatest thing ever as a child! The green and blue flumes (the green one was faster, the blue one for those more easily scared) provided so much entertainment before diving for the pool as the wave machine started! When it came to time for your coloured band to leave the pool there was always going to be tears. You might have even had a birthday party here too.

5. On the subject of birthday parties…

You inevitably had one or went to several at Superbowl in town (back of The Shires) or Laser Quest or roller skating at Granby Halls too! There were probably a few at McDonalds as well (remember the Hamburger Burgler?)

6. You had great day trips.

A walk by the beach, ice creams and donkey rides meant one thing… Skeggy! Skeggy was the go to seaside place for a day trip, so much so that they even sold the Leicester Mercury in the shops! Leicester Fortnight was rammed down there!

Aside from Skeggy you’d spend time at Bradgate Park with your fishing rod in the stream and over at Twycross Zoo. Remember Joe, the old gorilla who’d been there for years? He died aged 45 after being there since he was 18 months old! The orangutans too, they were always a favourite!

And what about a trip the The American Adventure? Cowboy action at the theme park was a massive holiday highlight with The Missile, the huge log flume and the rapids. The site has now been closed down and The Missile is now at Pleasurewood Hills in Suffolk and known as Wipeout if you ever fancy another ride!

7. You miss the old restaurants you used to go to.

In the days before Nando’s and Zizzi cropped up we had meals out at Joe Rigatoni’s in St Martin’s Square (the seafood lasagna was to die for), Fatty Arbuckle’s (they had the food challenge pinned down way before Man v Food came on the scene) or for a casual daytime bite maybe even the Swiss Cottage (2 sausage, chips and gravy, please!) You also probably spent a fair bit of time in Brucciani’s when you went into town with your parents too. If you want a trip down memory lane, go back in there and order yourself a chicken and stuffing roll and a lemon iced cream bun.

8. It was easy to go out underage.

None of this Challenge 25 nonsense. Some people had a fake ID, you know the handwritten sort that you slotted a passport photo into, but generally the bouncers would just ask for your date of birth, or the really good ones might to try trick you by asking for your star sign. Armed with a can of Diamond White or a bottle of Hooch or Breezer, the night was yours at the likes of Krystals, Undecided, Brannigans, Rhythm Room, Flaming Colossus, Traz, Fanclub, Life, Mosquito Coast or Zanzibar. Life even used to sell Hot Dogs at the corner of the bar, but no night out was quite complete without a TJ’s burger on the way home!

9. You miss listening to Leicester Sound.

No offence to Capital FM but it’s not the same, we want Leicester Sound back. You probably remember some of radio advertising jingles too… There’s a reason why you know about companies like Coldseal Windows (remember their advert to the tune of Baa Baa Black Sheep?) Yep, that’s the one!

Yes, in 1995 when Meridian Leisure Park opened up with the new Warner Bros Cinema they, for some reason, decided that the premiere of the latest Batman film, Batman Forever, should be hosted there! As thousands of people queued out for a glimpse of the stars, Leicester saw the likes of Val Kilmer, Chris O’Donnell, Oasis, the Manchester United squad (with Ryan Giggs and Eric Cantona in tow) and even Craig McLachlan (remember him?) showed up in his leathers! Move over Leicester Square!

previous article
Fitness: Let USN help you on your journey
next article
A slogan establishes this oil across the outrageous medium